Intel Eleventh generation desktop and workstation cores only in 2021? 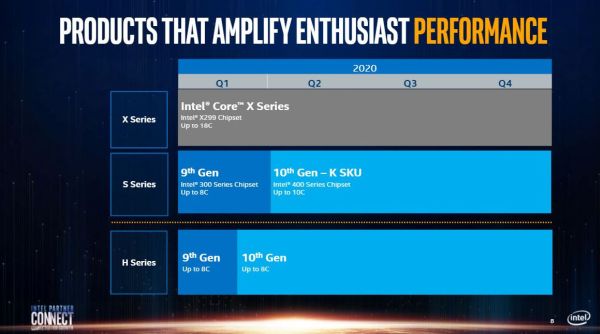 According to a leaked online slide we won’t see any new updates in Intel’s range of desktop and workstation CPUs for 2020. The new additions will therefore slide to 2021, contrary to rumors so far.

Eleventh generation Intel Core desktop CPUs may not arrive until 2021. So far, rumors were pointing to a Rocket Lake CPU debut by the end of the year to counter AMD’s Ryzen 4000s, but apparently Intel has no intention of submitting a new set of proposals by the newly introduced tenth-generation Comet Lake Cores.

A leaked online slide from an Intel meeting with Asian partners - which at the moment doesn’t seem to be a fake - shows that this year we won’t see any new additions to Intel’s consumer range, or at least no new series. The tenth generation Core processors will therefore remain at the top of Intel’s offering and from the slide it looks like we won’t even see a renewal of the Core X CPU range for the workstation industry.

The slide immediately opened the online discussions, among more or less sensible theories: on the one hand there are those who believe that contrary to the common belief, we won’t even see the AMD Ryzen 4000 CPUs this year, based on the company’s choice to renew the current range with new Ryzen 3000 XT models in the coming weeks. Some say that AMD has always talked about the debut of Zen 3 CPUs within the year (so also EPYCs for servers), without going into the specifics, but there is a recent roadmap related to Ryzen (below) that seems to confirm the debut of the 4000 series before 2021. Therefore, based on the possible slippage of AMD solutions, Intel would have postponed the release of the new mainstream series.

For our part, we don’t believe (but we could be wrong) that the Ryzen 4000 will postpone to 2021 or that Intel is marking AMD. The Rocket Lake chips, according to rumors, should feature a totally new architecture, both for the computing cores (Willow Cove?) and the graphics (Xe), but it is said that they will be produced again at 14 nanometers. There is also talk of a number of cores no more than 8, therefore less than 10 of Comet Lake and far from the 16 of the Ryzen 3000 (it does not seem that AMD will increase the number of cores with the Ryzen 4000 based on current rumors).

Consequently, it is fair to think that, more than anything else, Intel is following its own timing and working on a renewal of the desktop offer to be proposed in the first part of 2021. As always, it is not to be excluded some sudden change of program, perhaps on the basis of a 10 nanometer production process improved and finally able to support high frequencies. On the other hand, the Tiger Lake mobile CPUs coming in the next months will work at frequencies much higher than Ice Lake solutions thanks to an improvement of 10 nanometers.

These are just hypotheses, ideas in freedom, like the ones that would like Rocket Lake CPUs part of the tenth generation Core range with specific models and for this reason the roadmap would not show anything new this year. Anything can be, but if we stick to the roadmap, let’s not expect more jolts.

It would also be strange to see Intel retire a new range of CPUs a few months after its launch: in 2017, the debut year of the first generation of AMD Ryzen, the transition from the Core 7000 series to the 8000 series took 9-10 months. In this case it would be down to 4-5 months, a very short period of time.

Perhaps the most interesting news that is extrapolated from the slide is the absence of news for the Core X range, stopped at 18 cores and not competitive compared to the current Ryzen Threadripper solutions. Intel’s plans for the workstation sector are even less well known than its desktop plans: the company seems to be very focused on renewing the Xeon offer this year, first with Cooper Lake and then with the 10 nanometer Ice Lakes.

The latter are expected to offer a maximum of 38 cores and could be the basis for an “Ice Lake-X” workstation offering with PCIe 4.0 support and a request for a new socket. At the moment, however, this is also a hypothesis, the renewed competitiveness of AMD has changed the rules of the game and taken Intel by storm, which is called to a strong response in order not to lose significant market share.