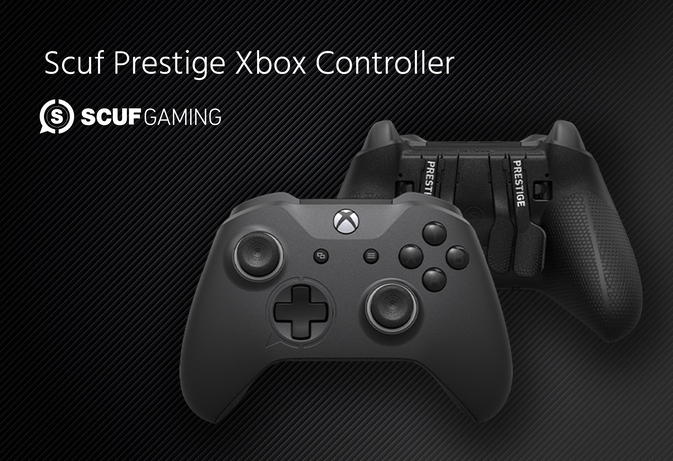 The guys from SCUF Gaming also want to have a slice of the elite cake and have launched a new piece of hardware with the Scuf Prestige Xbox Controller. The controller is priced in the same region, if not above the Elite Controller from Microsoft. We’ve tested it extensively for you and will tell you the pros and cons.

The Scuf Prestige controller comes in a stylish case that includes the controller and accessories.

Next to the controller is a magnetic key for reconfiguring the keys, four additional paddles, analog sticks for replacement, 0.9mm key for fine-tuning the keys, a design sticker and the obligatory user manual.

On top of that, there is an additional micro-USB charging cable, which comes in a high-quality nylon garment.

How the controller works

You can do all kinds of fine tuning with the supplied keys, but it is really not necessary.

The controller works out-of-the-box and you can start playing right away. But let’s take a closer look at the construction first.

From the front, the Scuf controller looks relatively ordinary. It is immediately noticeable that the entire controller is considerably lighter in relation to the Elite controller.

The sticks and the control pad, on the other hand, aren’t attached by a magnet, but you have to expose them first over the faceplate of the controller, if you want to adjust them. This has both advantages and disadvantages. The advantage is that unlike the Elite controller, the Scuf controller doesn’t fall apart when you drop it from the couch onto the floor and you don’t have to worry about finding the magnetic parts.

The disadvantage: You can’t just flux the sticks or the control pad, you have more effort for the change. I don’t know about you, but I extremely rarely change any stick on the Elite. So for me personally, the more solid construction is more of an advantage.

But the highlight of the Prestige controller are the paddles. Like the Elite, they are located below the controller. But they are completely different. Again, this has an advantage and a disadvantage over the Elite. The advantage is mainly at your own discretion, because it depends on whether you need all 4 additional paddles regularly. I myself only need 2 of them with the Elite and my hands have gotten used to it but it feels more comfortable without paddles. That’s because you have to raise your fingers a little bit to avoid accidentally pressing the paddles while playing.

The Scuf Prestige controller moves all 4 paddles to the center. Thus the 2 outer paddles are very comfortable for a normal hand size and the fingers are much more relaxed, at least for me.

The potential disadvantage here is when you need all 4 paddles. The inner paddles are again a little bit further away from the index and middle finger and therefore you have to reach over and can’t use the 2 outer paddles comfortably at the same time. For me personally this is no problem but for some players who need all 4, this could be an issue.

However, the fact that the paddles are in the middle of the table is another disadvantage. Unlike the Elite controller, you can’t just put the Scuf Prestige controller on the charging station. Worse still, the Scuf controller has a built-in battery. Supposedly, it should last 30 hours in a row. In my test it was only 4-5 hours after I charged for 24 hours.

How does playing with the controller feel?

Playing with the Scuf Prestige controller feels great. The lighter weight didn’t bother me, and the buttons and sticks felt good and did all the fast and slow movements well.

The analog sticks are a matter of taste, because unlike the Elite controller, they are not made of metal, but of plastic. So they feel a little less valuable when touched. De facto, however, they control themselves just as precisely.

The shoulder buttons are also excellent and for my taste even a tack better placed / shaped than on the Elite controller. So that no wish remains open here either.