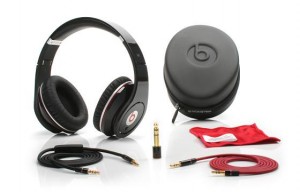 At a price of 300 euros, it is not surprising that consumers are looking for the cheapest product when they buy Dr. Dre’s Beats Studio headphones. When a supposedly low price then appears on the Internet, the joy is great - at least until the headphones arrive at home.

Malicious tongues claim that the success of a product can be measured by the number of plagiarisms. Based on this criterion, Dr. Dre has developed extremely popular headphones. Whether on eBay or privately: supposedly cheap beats headphones flooded the market years ago. For consumers it is increasingly difficult to distinguish plagiarism from the original products.

In the following, consumers will find tips on how to recognize plagiarism from Dr. Dre’s Beats Studio.

Dr. Dre charges around 300 euros for his Beats Studio, a lot of money for the target group: young people who, from a financial point of view, are usually still dependent on their parents and earn some pocket money with side jobs, if at all. Even the street price of 250 Euros is still too expensive for most of them. And so the young eyes look straight at eBay: Here you can get the headphones for unbeatable 50 Euros: A bargain!

In fact, the inexpensive headphones look just like the original, but on the outside they look deceptive. Even the packaging does not suggest that it is a fake: The box is stable, the packaging design is deceptively genuine and the print also looks authentic. Only when unpacking the box and taking a closer look does one realize that the logo of Beats does not correspond to the original.

But does that make a difference in the price? Even if the external differences will hardly bother anyone, the inside of the headphones looks different: The headphones are merely a passive device that lacks the well-known noise compensation. Thus, the plagiarism does not need any batteries and is light, but also loses what should make it so special.

To avoid buying a copy of Beats on the Internet, consumers should be aware of the following:

From the outside, plagiarism differs from the original in the following ways:

Apart from the external differences between the beats fake and the original, there are much more serious differences. You buy headphones to listen to music, then when you buy the famous Beats Studio, you want a unique sound experience. This is exactly what you miss with the plagiarism. Most of the beats fakes are quiet and are operated passively. The sound is poor in detail, dull and very booming. Although the sound can recover after a few hours, it still doesn’t come close to the original. Not bad is the bass, which is already emphasized in the original.

Disappointing are the mid and high frequencies. A big problem with almost all music styles: Classical music, jazz and rock are practically unbearable. Pop and Dubsteb tracks, on the other hand, sound relatively good.

If there is a suspicion that the product is fake, you should ask the seller on the Internet for more photos to analyze the product based on the above mentioned information. In case of doubt, it is advisable not to spend the money unnecessarily - the Beats Studio by Dr. Dre-Fake is not a good headphone - not even for 50 Euros.