War of the Formats Lossy vs. Lossless 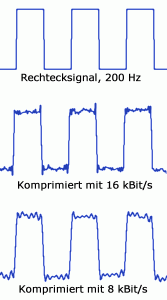 For years, the number of legal music downloads has been increasing rapidly, while CD sales have been declining. Since then, file formats such as MP3 and AAC have played an increasingly important role in the music industry. However, the majority of people do not know the difference between the different codecs, let alone lossless and lossy formats.

The problem is that online shops often sell MP3s as “CD quality”, but technically this is not possible. The MP3 format is a compressed (lossy) format that cuts out sounds from the music file that are inaudible to the human ear. The result is a small music file that offers similarly good sound - so the theory goes.

Besides lossy formats like MP3 and AAC, there are lossless formats like FLAC and ALAC. The iPod has been able to play the ALAC lossless format since the end of 2003. The majority of iPod owners still use the lossy MP3 and AAC formats because they are smaller and, according to experts, there is no audible difference between compressed and uncompressed data.

A look at the digital music formats

Since the introduction of iPods and MP3 players, CD players have become obsolete. Of course, at that time nobody wanted to throw away their CDs and buy new digital titles. Instead, the CD collection was digitized into MP3s. Developed from 1982 onwards by the Fraunhofer Institute for Integrated Circuits, MP3 was established in 1992 as part of the MPEG-1 standard. The principle is simple: During compression, the so-called Pulse Code Modulation (PCM) format of a CD is converted into a space-saving MP3. As mentioned before, basically inaudible data is removed, thus saving space. The result is files that are up to 90 percent smaller than the original file.

Of course MP3s are not the only option, there are other formats available. However, the majority of the formats used today are lossy: 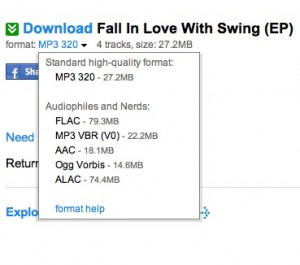 A three-minute music file on a CD has a size of about 30 to 40 megabytes. An iPod with eight gigabytes of memory has room for up to 260 songs - the equivalent of about 20 CDs. For many people this is simply too little. With this thought in mind, Lossy formats were created that greatly reduce the size of music files without audibly affecting the quality.

Lossless compression is a kind of WinZip for music files. Data is packed together more efficiently without cutting off parts. The difference between computer and audio file compression is that the latter allows random access within the file.

As mentioned above, the MP3 codec was developed in the late 1980s and registered as a standard in 1991. In normal use, the format reduces the file size by a factor of 10, so a 30MB music file on a CD is only 3MB small. The iPod now offers storage space for a total of 2,600 music files. Also practical: Every music file and entire albums can be downloaded within seconds.

Of course, the codec also has a disadvantage: It removes a part of the musical data. How much is removed depends on the bit rate, but more about that later.

During CD playback, the two channels pull about 1,400 kilobits per second of data. A typical MP3 plays at only 128kbps. To achieve this massive data reduction, the MP3 codec splits the linear music wave into discrete parts. Each part is analyzed individually. Based on the psychoacoustic theory, the codec’s developers have determined which information can be easily removed. Now the question of all questions: Do the listeners miss this information? That depends. It’s hard to prove if the codec’s developers applied the right psychoacoustic theory.

One thing is for sure: Lossy audio formats differ in that their developers cut away different information. But the fact is that all lossy formats cut away information - whether important or not. Differences can be seen in this comparison with a spectrum analyzer. Does the bit rate really make a difference?

The higher the bit rate, the more information per second a song has. Of course, the size also grows with higher bit rates. The music found on CDs usually has more than 1,000 KB/s. As explained earlier, the size of such a song is 30 to 40 megabytes, which was impossible to download from the Internet many years ago.

Today the situation is different: Hard drives are large and hard disk space is cheap. There is free hard disk space on the Internet that can be accessed at any time. Storage space is therefore no longer a problem. For this reason, more and more people are enjoying uncompressed music. But is it worth the extra storage space? The answer is: it depends.

One important factor is first and foremost the audio equipment. If you use high-quality stereo systems and headphones, you naturally don’t want to listen to 128 kbit MP3s. The difference or rather the bumps between such an MP3 and a FLAC file is audible to many people. On the other hand, if you listen to music on your iPod every day and use poor quality headphones, a difference will simply not be audible to you. Then it’s not worth wasting additional memory on uncompressed music.

Another factor in the Lossless-Lossy War is your own ears. Some people cannot perceive all the details of a song. Accordingly, they may not hear the difference between an MP3 and a FLAC file. This ability can be learned over time, but if you can’t hear it now, it doesn’t matter.

The conclusion is accordingly short and to the point: As with all things, each person should decide for himself what is the best choice. Those who hear the difference between compressed and uncompressed music files should decide for the higher quality. Those who do not hear the difference between FLAC and MP3 should not be persuaded by other people, especially so-called audiophiles.

But: Lossless files are files of the future. The reason is simple: Since there is no data loss, you can create an uncompressed WAV file from a FLAC file, for example, at any time. And: Of course, the opposite direction also works: Lossless files can be converted to a lossy format at any time, if storage space should become a problem.

« About DDWRT
What Type of Headphone User Are You? »
comments powered by Disqus