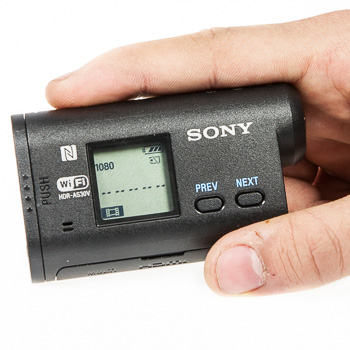 Sony has upped its game with a couple of new and improved pocket camcorders. The AS30V sees its tech specs upgraded and connectivity boosted, whereas the AS100V is a higher-end model aimed at pro users, due to land in spring 2014. We took the HDR-AS30V out for a spin to find out how it compares to last year’s version.

Like the GoPro Hero3+, the AS30V hasn’t changed much design-wise compared with its predecessor. It therefore remains compatible with Sony’s existing line of accessories. And, again like the new GoPro, it’s the waterproof housing that has instead been trimmed down (this housing is usually included but check before you buy) making it 35% lighter and 25% more compact. However, the new housing is only waterproof to 5 metres rather than the whopping 60 metres for the previous version. Note that last year’s SPK-AS1 casing is still available as an optional extra and sells for about £35.

In keeping the same design as the AS15V, the AS30V inherits exactly the same flaws. For starters, the camcorder’s oval shape means that you can’t stand it flat on a table. To use it free-standing on a flat surface, you have to load it into its waterproof housing, but that in turn means that you can’t access any of the connections ports (mic socket, power socket, etc.). There’s clearly room for improvement there. Plus, it’s a shame that the LCD settings screen isn’t backlit, as it can be hard to change settings in darker conditions.

The AS30V has built-in Wi-Fi that’s easy to set up and use thanks to NFC—so long as your smartphone or tablet is also NFC compatible. Once connected, you can control the AS30V remotely and see what you’re filming live on your smartphone screen (see inset). On top of that, Sony’s pocket-sized action cam has an onboard GPS for geotagging movies with location data. This can be used with Sony’s PlayMemories application to retrace your travels. And if you happen to have several AS30V camcorders running at once, this app gives a split screen view so you can see footage from all the cameras in one final movie. Plus, the Movie Rotate function can be used to turn video 90° clockwise or anticlockwise.

Wi-Fi is certainly handy but it seriously drains the camcorder’s battery life. The 4.5 Wh battery runs for about 2 hrs 30 mins with all connectivity options switched off, which is pretty reasonable. However, if you fire up Wi-Fi and GPS, the AS30V barely holds out for more than 30 mins.

Sony as30v connexions 1(1)Sony as30v connexions 1(1) Controls are kept to a strict minimum, with three buttons and a basic LCD that only displays text. But in spite of this rather sparse set of controls, settings are actually very easy to change in the HDR-AS30 … once you’ve had a little practice. Every change or trip into the menu is confirmed by a beep noise that’s not particularly discreet and which can’t be switched off. However, the good news is that the new waterproof housing does let you access the main buttons, which wasn’t the case with the first-gen housing (waterproof to 60 m).

The AS30V has a separate photo mode that takes reasonable-quality still shots, which is an improvement on the 2-Megapixel snaps that the AS15 took. But the AS30V is obviously mainly designed for video. This little camcorder has a digital stabilisation system that works by cropping images, dropping the angle of view from 170° to 120°, although that’s still perfectly reasonable. The stabilisation system does a decent enough job too, but it struggles to fully counteract the kind of heavy vibrations you get from using the camcorder mounted on a bike, a motorcycle or a skateboard. That said, it does help make videos a more watchable.

The Sony HDR-AS30V records Full HD 1920 x 1080p video at 30 fps or at 60 fps (H.264 compression) with a maximum bitrate of 28 Mb/s. There’s a choice between PAL and NTSC modes, but you have to re-start the camcorder and reformat the memory card each time you switch. In PAL mode, video is recorded at 50 or 25 full frames per second. In 720p HD mode, a selection of framrates is available with 30, 60 or 120 fps for slow-motion shooting.

In daytime conditions with good light, this Sony action cam struggles to match the kind of picture quality seen with the GoPro Hero3+, with an image that’s less sharp and precise. The dynamic range isn’t as effective either, with bright highlights that are soon blown out by overexposure. However, quality is fine for uploading clips to social media and video sharing websites. Note that in 1080/25p mode, the Sony model has a 16 Mb/s bitrate whereas the GoPro films at 20 Mb/s, so movie files from the AS30V are a little smaller in size. 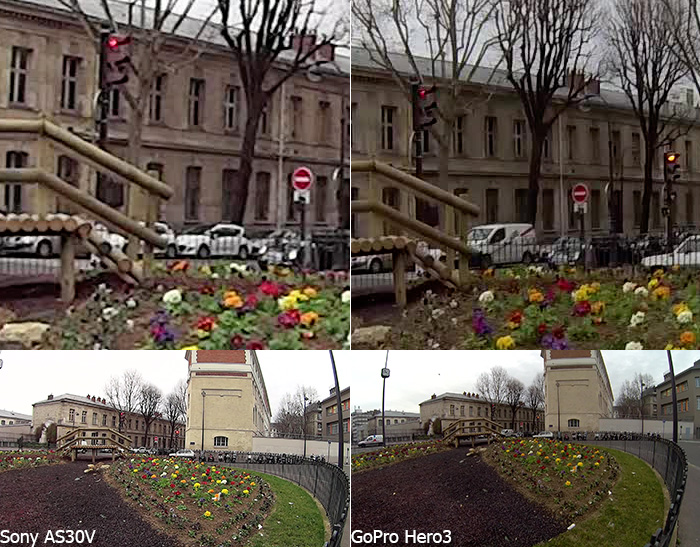 In the end, we have to wonder why manufacturers insist on using sensors with such tightly packed pixel densities in basic camcorders that film in 4 Megapixels at best (2.7 K for the GoPro).

This Sony AS30V does a decent job of filming night scenes, with good levels of luminosity (the AS30V overexposes shots slightly).

Sony AS30v test review comparaison gopro hero3 nuit Wearable Live View Monitor & Remote Although there’s no screen in this Sony camcorder to show you what you’re filming while you film, there are two ways of getting around this. – You can download Sony’s smartphone app, which shows what the camera lens “sees” directly on your mobile phone screen. – You can buy Sony’s watch-style LiveView remote (£150) that connects to the camcorder over Wi-Fi so you can see what you’re filming and change a few settings remotely. This wearable remote is shockproof and waterproof to 3 metres.

With a field of view at 170°, the scene is pretty wide, but this drops to 120° once you switch on the digital stabilisation system.

The main problem with this wearable monitor is that it connects to the camcorder over Wi-Fi, which drains the battery in a flash.

In the already saturated market for pocket-sized action cams, the Sony HDR-AS30V struggles to stand out on image quality alone. However, the built-in GPS is a nice touch and onboard Wi-Fi (and NFC) is always handy. It also has a few interesting extra features, such as the 120 fps slow-motion mode.