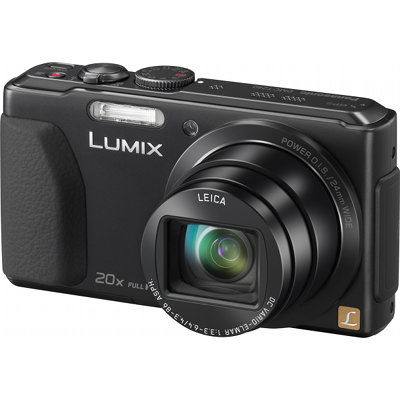 The Lumix TZ40 is brimming with Panasonic’s ambition to bring its TZ range of compacts back to the forefront of the high-end superzoom compact market. To do so, Panasonic has loaded this camera with all its latest top-end electronics, including an 18-Megapixel BSI-CMOS sensor, Wi-Fi, GPS, NFC and a new 920,000-dot multitouch screen. Basically, the TZ40 brings you everything that’s hot in the 2013 compact camera market in one top-of-the-range flagship snapper. Could this be the camera that gets the TZ series back on top?

In the wonderful world of TZ cameras, the general layout doesn’t tend to change radically from one year to the next. But that’s no bad thing. For starters, the off-centre lens is nicely out of the way for larger-handed users and the small but sufficiently deep handle ensures good grip. Unlike last year’s TZ30, the handle doesn’t run the full height of the camera body. Note too that the little bump above the lens that was a stylistic nod to Panasonic’s GF5 has been ditched this year. The general build quality is good with no assembly or alignment issues to report. The boxy, sharp-edged casing is finished in a combination of matte, grainy and glossy surfaces. Panasonic Lumix TZ40 review - screen and controls

The new Wi-Fi mode has its own dedicated button in the top-right corner of the rear face, just next to the textured thumb-rest. This makes for a pleasingly symmetrical layout that visually fills up space next to the screen without making the controls look too busy—a stylish touch. The GPS aerial isn’t visible externally but an NFC module has appeared on the camera’s left-hand edge. There still aren’t a whole load of practical uses for this new-found connectivity—or perhaps none at all, although Panasonic has promised to work on that. However, GPS buffs will be pleased to hear that the TZ40 comes with Pana’s Lumix Map Tool software (on DVD). There are 10 region-based maps to choose from, each of which is around 400 MB to 1 GB in size. The full set of 10 maps weighs in at 5.49 GB, which explains why they don’t come pre-loaded on the camera’s internal memory. You can therefore save your most frequently used maps to the camera’s SD card. Once switched on, the GPS stays active when the camera is both on and off. You’ll need to switch to in-flight mode to turn the GPS off when the camera’s out of action.

You’ll need to download the “Panasonic Image App” application onto your smartphone or tablet to use the TZ40’s Wi-Fi functions. This lets you control the camera remotely or transfer photos to your phone for easy sharing and/or uploading. Just like the Lumix TZ40’s own menus, the app has plenty of options and is clear and user-friendly. Well, it’s perhaps not so user-friendly the first time you use it, as you have to switch on the Wi-Fi mode in the TZ40, then connect your smartphone to the network created, then launch the application. But still, it’s worth the effort. In fact, “Panasonic Image App” is currently the most feature-rich app of its kind. It obviously lets you take photos and record video with the camera via your smartphone, but you can also zoom, set the self-timer, set the various shooting and exposure modes, and access pretty much anything else that’s on offer in the camera’s “Quick Menu”. The app’s functionality and versatility should set the standard for competitor camera Wi-Fi applications, which are often lacking in options and/or still finding their feet.

Finally, a word about the screen. The new higher resolution of 920,000 dots keeps the menus looking nice and crisp. Horizontal and vertical viewing angles are good too, and the screen brightness adjusts automatically to help counteract its glossy finish in very sunny conditions. The screen’s responsiveness is generally good, except in low light, when it does start to glitch and judder. The onscreen image is a little too saturated and contrasted, which is no doubt intended to flatter photos to the detriment of colour fidelity (Delta E = 8.2)—a trick often used in smartphone screens. That said, you’ll soon forget about these minor blips when you start playing around with the multitouch controls. You can scroll up and down, pinch to zoom, choose your AF zone and shoot via the touchscreen. Smartphone users therefore shouldn’t be too disorientated here, although they may find touchscreen sensitivity a little sluggish. The touch-controls feel a bit less responsive than with speedy capacitive displays, and you do need to press down on the surface a bit to register commands.

Superzoom compacts are slow, right? They can be sluggish to the point of off-putting, right? Think again! With the TZ40, it’s time to cast off those old assumptions. Contrary to what we’ve come to expect from superzoom compacts, Panasonic ‘s engineers have pulled out all the stops here, making the TZ40 the speediest superzoom of its kind. In fact, the TZ40 is one of a handful of cameras that should actually have ended up with six stars according to our current test criteria. Obviously, it’ll have to make do with five out of five, but that’s still very impressive.

The TZ40 shoots out its lens and snaps a first photo in 1.3 seconds, shaving about a second off last year’s models and even some competitors. The TZ40 saves photos quickly too. The autofocus is a little less exceptional, but that’s mainly because the other results are so darn impressive. In real terms, the AF still works almost instantly in good light.

The mid-range TZ35 turned out to be quite disappointing on this front, but the TZ40 does a better job. Compared with 2012’s TZ30, the TZ40 gets an extra 4 million pixels (upped from 14 MP to 18 MP) which have been effectively absorbed by the updated electronics. The lens, however, is lifted straight from last year’s model (Vario-Elmar 20x zoom equivalent to 24-480mm, f/3.3-6.4). Barrel distortion is a visible issue at wide-angle but this soon drops off as you start to zoom. Sharpness levels could be better, but quality is perfectly fine for making 4” x 6” prints (10 x 15 cm), or even 8” x 12” prints (20 x 30 cm) if the photo is up to it.

However, the TZ40 seems to be quite contradictory, as while the lens appears to be full of good intentions—always ready to pick out the finest of details—these are all too often wiped out by over-enthusiastic smoothing from the image processing system. In fact, smoothing kicks in pretty early in the ISO tests (see below) and it can be quite invasive.

Picture quality is perfectly fine from 100 ISO to 400 ISO, with good exposure levels and a nice amount of detail. Things get a little less precise at 800 ISO, but the results are still usable. Detail and contrast then drop clearly at 1600 ISO. Colour noise covers the scene at 3200 ISO and 6400 ISO where the TZ40 has a certain penchant for magenta speckling, which in turn matches the colour fringes that appear around highly contrasted zones. Thankfully, this optical defect is corrected at lower aperture settings.

The Lumix TZ40 is first and foremost a superzoom compact, and playing around with the longer focal lengths is a real treat. The camera is perfectly well stabilised and, with a little concentration, it’s possible to shoot at around 1/20 ths with the camera hand-held. The Power O.I.S. stabiliser features a “Level Shot” horizon correction function and generally does a good job—so long as you’re working in decent light. But seeing as the lens aperture drops as you move up in focal length, the TZ40 has to play on the ISO setting to maintain reasonable shutter speeds. That effectively creates a viscous circle, as lens quality is very good at wide-angle and telephoto, but its hard work tends to get wiped away by smoothing when the camera opts for higher ISO settings.

And, for once, we’re going to break the habit of a lifetime and say that you don’t need to avoid the digital zoom like the plague. Here, the digital zoom can simulate a 40x zoom (equivalent to 960 mm!) with no drop in resolution—it stays at 18 million pixels! And seeing as the resulting photos will look fine for prints up to 4” x 6” (10 x 15 cm), then why not give it a go when you really need to? It can really save the day in certain situations.

The TZ40 isn’t stingy with settings in video mode. It shoots MP4 video at 30 frames per second in Full HD, HD or VGA resolution. It can also film AVCHD video in Full HD or HD, in interlaced or progressive scan formats, with or without the GPS, all at 60 frames per second. Add to that the high-speed video modes (120 fps in HD, 240 fps in VGA, both in MP4 format), and that makes no less than 13 different video “formats” to choose from. And quality is good in all cases. Exposure is nicely handled, blacks are rendered well, the stabilisation system is effective and the stereo sound has a spatial effect. The TZ40 lives up to Panasonic’s reputation for good-quality video modes. There’s a slight trace of aliasing, but it’s only really visible when you take a screenshot—pretty much never, in other words. Note that you can take a photo while filming but that resolution is limited to 13.5 Megapixels due to the 16:9 aspect ratio.

JPG: One Size Fits All Sometimes, cameras that are spot on with their hardware specs can be found wanting on the software side of things. But in many ways, that’s not as troublesome as the opposite scenario, as firmware updates can easily correct bugs, fill in what’s missing or bring new functions. The Lumix TZ40 is one such camera. It’s packed with technology but it manages to overlook some simpler things … like JPG image settings. And that’s not something you only see in expert-level snappers. It’s not like we’re asking for a RAW mode or anything—just the possibility of setting the saturation, sharpness and contrast levels yourself so you can play around with the results and maybe tone down the smoothing effect along the way. Just a thought …