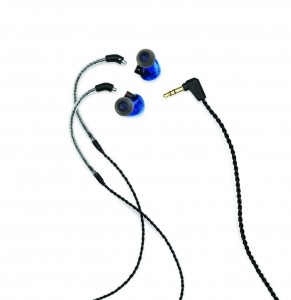 Recently we tested the Bose QuietComfort 20 in-ear headphones and were completely out of our minds. We used our good mood to test another in-ear headphone in the upper price range, the Logitech UE 900, not to be confused with the Logitech UE 9000 Bluetooth headphones. According to their own statements, the same people were responsible for the new Logitech headphones, who already design professional in-ears for sound engineers and studio musicians. Of course, we’re talking about Ultimate Ears, which was bought by Logitech, and whose current products carry the “UE” label. The result is supposed to be a unique design that hides four small speakers at once. This review shows how the Logitech UE 900 sound and whether they convince us.

Logitech is one of the few manufacturers that offers its in-ear headphones in several color options. The Logitech UE 900 is only available in blue, but it is very eye-catching and, in our opinion, visually very appealing. In the stylish storage box, the buyer doesn’t yet have a clue what’s waiting for him. Once unpacked, the flexible and twisted cable is the first thing you notice.

Also positively striking is the volume control with buttons for title jump and playback/stop. If you want to do without this ease of use, you can reach for the alternative cable without the controls - this is not in blue, but black.

Wearing comfort: Fits in the ear

In-ear headphones are basically always supplied with several silicone hoods, as everyone has different sized ears. Ultimate Ears used to make in-ears with customized silicone inserts for musicians, but the average consumer cannot afford this luxury. UE therefore considered how the wearing comfort could be increased nevertheless. The result: rotating heads that make it easier to insert the earphones. In practice, the whole thing works very well; the in-ears can be easily inserted into the ear and remain there without falling out. A secure hold is primarily provided by the silicone-coated cable piece, which is routed behind the ear.

When you use the Logitech UE 900 headphones for the first time, you’ll be amazed at how many new details you can bring out in your favorite tunes. We tested the headphones on iPhone 5, MacBook Pro Retina and the Beyerdynamic A20 headphone amplifier. With the latter you can squeeze even more power out of these in-ear headphones.

On “Taxman” by the Beatles, for example, we noticed that John and Paul whistle in the background. Every song becomes a completely new experience due to the detailed reproduction. The reproduction is not only made possible by the four speakers, two of which are responsible for the low frequencies and the other two for the mid and high frequencies, but also by the perfect fit. Logitech also supplies eight silicone inserts - making the smallest one XXS.

It’s unusual to use the Logitech UE 900 in the beginning, because you wear it upside down, because the cable leaves the headphones upwards. According to Logitech, once the headphones are in place, they should be able to suppress noise by 26 dB. The test showed that the noise level was good on the road and at home. Neither a noisy office nor a busy street was negatively noticed. The almost perfect sound reproduction is complicated by the cable: Due to its arrangement, it doesn’t produce any disturbing noise while rubbing against clothes.