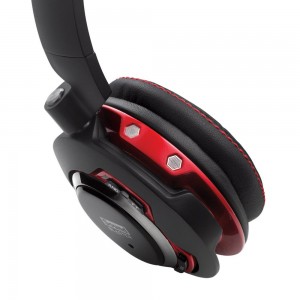 Creative has released a high-end Bluetooth headset with integrated SoundBlaster audio chip and NFC in summer 2013. According to the manufacturer, the integrated audio processor is supposed to optimize the sound quality in real time - significantly. Our test report shows how good the sound really is and whether the manufacturer delivers what it promises.

The manufacturer Creative has been known for many years for its audio equipment for PCs. We have already tested some of the company’s headphones, including the award-winning Creative Aurvana Live! and Creative Sound Blaster Tactic3D Wrath. The Sound Blaster brand name will also be well known to PC fans, as in the past few days almost every gaming PC has had a Sound Blaster sound card slumbering in it. Since the spread of onboard audio, however, the focus is no longer so strongly on the high-quality products.

Creative wants to change exactly that with the Evo ZxR headphones. Already when categorizing this product, one gets into thinking: Is it a headset, headphones or rather a sound card with ear cups? The device itself contains the finest technology: The AXX1 audio chip, a quad-core processor as well as Bluetooth and Near Field Communication (NFC) for communication with other devices. Also on board is the in-house SBX software, with which owners of the headphones can optimize the sound.

But that’s not all: thanks to a dual microphone array, the headphones register both your own voice and external noise - the latter is eliminated by phase inversion (Active Noise Cancellation) or, in conversations, the voice of the person you are talking to is output via the headphones. Creative has also integrated CrystalVoice: This noise and reverberation suppression is intended to make voice recordings clearer and at the same time gives users the opportunity to modulate their voice.

The exterior: wearing comfort and features

Creative has not spared in terms of looks. The Sound Blaster Evo ZxR looks chic and modern with its black and red look. The headband is comfortable and softly padded, the size can be adjusted via a metal rail. The artificial leather covered ear cups are also comfortable. A nice touch is the glow of the outer sides of the ear cups: red when in use, blue when paired. When it comes to wearing comfort, we unfortunately had to find out that the headphones don’t find a hold on small headphones and slide down. Otherwise, the Sound Blaster Evo ZxR is very well made and makes a high-quality impression overall.

The Creative headphones are operated via the controls on the right ear cup: there is a volume control, forward and backward buttons, the power button and the SBX button. The latter activates sound optimization. Practical: the Sound Blaster logo not only conceals the NFC sensor, but also allows you to answer or end phone calls.

Software and everyday use

To use the headphones, you should first download the free software from Creative. The software is available for PC and Mac as well as Android and iOS. On PC or Mac the headphones are connected via USB. Other devices are connected to the Creative Sound Blaster Evo ZxR via Bluetooth or NFC. After installing the software, functions such as CrystalVoice can be set or another SBX profile (music, gaming, movie) can be selected.

The following connection options are possible:

Finally, let’s get down to sound, after all Creative promises great things in this area. For an RRP of 300 Euros, our expectations for the headphones were correspondingly high. Of course, the Evo isn’t hi-fi headphones and shouldn’t be compared to one. Without software gimmicks, the Sound Blaster Evo ZxR sounds bass-heavy, which means that many details are lost. Only after we played with the software could the Evo show its strengths: Multi-channel music now sounds spatial and detailed. A bit of experience for adjusting the sound is therefore necessary to enjoy these headphones to your full satisfaction.