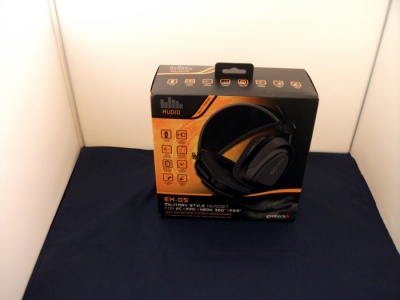 When it comes to online gaming the ability to speak with other players or your buddies is paramount - especially if you are playing team based games, such as co-op.

This is exactly what we wanted to do recently when reviewing COD Black Ops 2 for the PS3.

So we set off looking for a suitable headset that would work with the PS3 primarily which also had to be of a realistic value - as we did not want to spend over £35. After doing some research we found the Turtle Beach P11 and the Gioteck EX-05 multi-format wired headset (though they also do a wireless version). For this review, we look at the Gioteck headset. This baby costs £30.44, but unlike the P11, it has the added bonus of being compatible with not just the PS3, but also the Xbox 360, PC and MAC.

Our Gioteck review sample was not donned in the military colours that we have seen in some pictures on the internet (on Amazon for example), but cosmetic difference aside there are a lot of positives (and a few noticeable negatives) that we took from our first impression.

Compared to the Turtle Beach P11 headset (which we reviewed here), the headset does not have the same premium feel. For example the control box (containing the microphone on/off switch and volume controls) which is attached to the 5m cable has that plastic feel and lacks a clip meaning you can’t attach it to you for easy reach during gaming.

Additionally the cable - when plugged into the PC - still has the red/white audio cables attached which can’t be removed like on the P11.

However on the plus side we liked the large band at the top of the headset and the larger ear cups which rotate to a greater degree than the P11, meaning that when placing the headset on your head the fit is a bit better.

In fact for those who wear glasses they are brilliant. By adjusting the straps - to the side of the headset - they felt instantly comfortable.

The microphone which sits to the right side of the headset is also great, it folds down from the right side and due to its rubberised material can be bent into almost any angle, making it really good for positioning the microphone during voice chat.

The only gripe is due to the softer material used for the ear cups, our ears did get a little on the warm side. It wasn’t painfully bad, don’t get us wrong, but after a few hours of use we did notice the difference is comparison to the P11. In the hotter summer months it will be interesting to see how warm our ears would get.

The Gioteck comes with a pamphlet guiding you in how to install the headset; we found these guidelines less confusing than the P11.

For the PS3, you need to have the original AV cable that comes with the console - because you need to plug the left and right audio leads (red/white) into this. However like the P11 you don’t plug the audio leads into the TV (the setup manual clearly explains this). Instead you plug the HDMI cable in and leave the audio connectors loose.

However, the Xbox 360 setup requires more work, though in fairness the small pamphlet does help by giving you three options for connecting the headset to your console. Depending on your existing setup, if you use HDMI for example then you will need to purchase an optional RCA cable because the AV cable that comes with the Xbox 360 is too big to use alongside the HDMI. On the plus side this can be bought for £4.42 from Amazon.

Additional setup is also required after you have the Headset attached to the Xbox as you then have to connect a small 2.5mm cable from the control box to the Xbox 360 controller in order to get the Microphone to work.

So in terms of console setup, the Xbox 360 takes the longest but it’s relatively simple when you run through the process step-by-step.

On the PC side this is just a case of plugging in the USB cable or so we thought. Unlike with the P11, we had to remember to switch the box to PC/PS3 mode first and then enable the microphone port otherwise the headset would not work.

Additionally we had to go into our computer’s control panel to check the sound settings and replace the USB port and plug it back in again to get the headset to be recognised in iTunes. Mind you this is a problem we have had with other speakers, so it is perhaps more of an issue on our own PC.

The only major negative is a similar experience we faced with the P11, in that when you are sitting close to your computer there is quite a lot of cabling (1.3m more than the P11 to be precise). Additionally the lack of a clip for the control box was also a minor hindrance as it kept falling to the floor.

Regardless of our early observations the Gioteck come to life from an audio point of view. On the PC listening to music sounded great, though we could have done with a slightly meatier base.

Gaming is where the headset was designed for and for most purposes it does a fantastic job. Mind you we still felt the sound from the P11 edged it slightly (from the PS3 point of view), but in Call of Duty Black Ops 2 for example the immersive sound quality hits you instantly. The audio has a nice balance of treble and base, with not one aspect overpowering the other. This is impressive given that the headsets are only stereo.

A similar story was found when using the attached microphone. Speaking to others was clear, with only a slight trace of interference at lower volume (PC/PS3).

The only exception to the above was with the Xbox 360. It states in the manual that you should make sure you don’t have the Xbox 360 controller charging when you are using the headset as there will be a lot of interference. While this is correct, it does cause a the problem for those who use a wired controller.

This is because the wired controller uses the USB port at all times and here we noticed significant interference when the microphone was turned on.

Mind you if you had a wired controller we would not recommend using this headset anyway as the sheer amount of cables is a little off putting, so a wireless version would certainly be the better option. The only flip side with the wireless version is you don’t get the control box from our understanding.

The headset required more setup on the Xbox 360 than we would have liked and the build quality in places is questionable. However for gaming and voice communication (apart from Xbox 360 users with wired controllers) the headset does a great job given its low asking price.

On top of this with the rotating ear cups and cleverly thought out positioning of the microphone, the headset offers improved comfort - even for glasses wearers (though are ears did get quite warm). Even so if you are looking for a headset to game with and have multiple consoles/computers, then a pair of the Gioteck EX-05’s are certainly worth sourcing at this price!