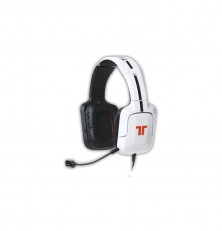 From the manufacturer Mad Catz we already presented some headsets of the Tritton series, among others the Kunai and Detonator. Today we will take a closer look at the 5.1 Surround Sound Headset Tritton Pro+ for PS3, Xbox 360, PC & Mac. For the true professional gamers who can’t do without fun or comfort, the manufacturer promises the highest sound quality combined with good features and workmanship. This test report shows whether the promise is fulfilled.

Proud price for the entry into the upper class

With a recommended retail price of 159.90 euros, the Tritton Pro+, which will be released at the end of September 2012, is clearly in the upper class - you’ll notice that when you look at the packaging at the latest. While cheap products linger in an unlovingly glued-together plastic sleeve, Mad Catz has given his product an elegant cardboard box that is also extremely large. When opening it, the view to the chic headset is revealed, under which there are some boxes and cans where microphone, cable and the decoder box can be found. There are many cables: an (analog) PC adapter, an optical cable (digital), a USB cable, a power cable for English and German sockets and an adapter for the Xbox 360.

You can already see from the scope of delivery that you can’t just plug this headset in via a 3.5mm jack and get started. Fortunately, there is a clearly arranged manual on Tritton’s website, where the whole thing is explained in detail. For those who will be using the headset on different devices, changing adapters and cables may be a little tedious, but they have a product that is compatible with both computers and consoles.

Quality where you only look

Fortunately, the quality does not stop at the packaging. When taking out the headset, it becomes clear that Mad Catz hasn’t spared here either. All materials feel high quality. The padding of the ear cups is soft and makes it comfortable to wear. For increased wearing comfort, the ear cups can be turned in both directions, so that they adapt individually to every head shape. Basically, the headphones fit relatively close to the head, which is actually no problem. It might be problematic for spectacle wearers if they additionally squeeze glasses between headset and ear. After a few hours, the temple will press itself painfully into the skin.

The 5.1 sound is provided by two 40 mm subwoofers, two 30 mm front and rear speakers and two 23 mm centre speakers driven by the external decoder box. Fortunately, all components do their job brilliantly: music as well as videos and games have excellent sound quality throughout. Here’s what we tested:

The strengths of the headset come into their own in the horror game Amnesia: The Dark Descent. You constantly have the feeling that the monsters are breathing down your neck. But the Mad Catz Tritton Pro+ is also convincing in Black Ops 2: explosions sound powerful, shots and footsteps of the opponents can be located easily thanks to 5.1 sound.

For online gaming we have launched Teamspeak 3 and Ventrilo. The microphone can be removed when not in use, otherwise it did its job well, but not excellently. The speech is transmitted well and understandably without background noise.

For this price, the Mad Catz Tritton Pro+ is a decent headset that we can recommend to those who are looking for a great audio-visual experience and would like to spend a little more.