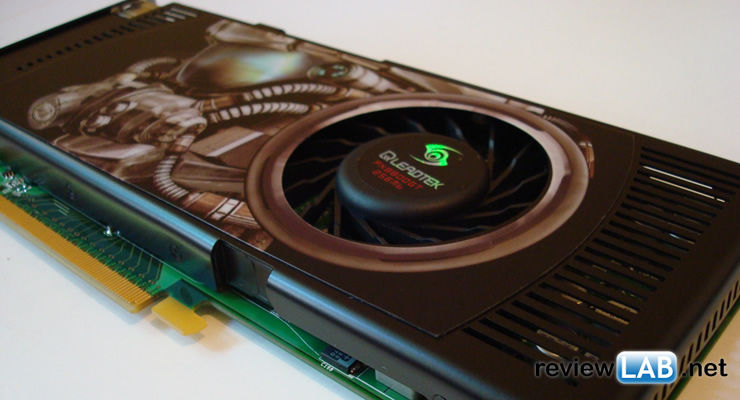 The race on the marketing of high-end video cards has lately been well-led by NVIDIA. One of great achievements was the launch of GeForce 8800 series, the world’s first DirectX 10 compliant graphics cards, the GeForce 8800 GTX / GTS based on a new G80 GPU architecture. Time has passed and ATI hasn’t been able to strike back with any top performance products. We know that ATI had some difficulties after the merge with AMD, what delayed the R600 development. So, until everything settles down, NVIDIA’s products have been mainly running alone.

But what really hurt ATI/AMD after all was NVIDIA’s GeForce 8800GT series. This time NVIDIA realized that launching a mid-end product with, while having all 8800 series qualities, affordable price would make up a great combination. And this is what happened, some core tweak came with the shrink to 65nm process, integration of the display engine and performance delivering of some ‘high-end’ boards, for example 8800GTS and GTX, which are based on G92. The GeForce 8800 GT prices between $199 and $249, putting many competitors models to shame.

Today we’re going to review the Leadtek PX8800GT 256MB Video card and check out everything this great GPU can offer.

But first, let’s get to know a little more about Leadtek.

“Founded and headquartered in Taipei Taiwan of 1986, Leadtek Research Inc. has been living up to its reputation for reliability, quality and performance based on unrelenting R&D and innovation. Over 20-year experience on 3D graphics design and manufacture, Leadtek has striven for computer and communication products markets, which is divided into 3 Business Units: Computer Multimedia, Wireless Communication and Audio/ Video Communication, covering product lines with 3D graphics, workstation graphics, TV tuners, GPS, TeleCare, VideoPhone, Video Surveillance and so on. To satisfy with more needs, Leadtek will continue to stir the market’s imagination, turning new dreams into digital reality with ever more original hi-tech products forged in its laboratories of cutting edge technology. For more information, please visit www.leadtek.com“.

The Leadtek PX8800GT 256MB comes in a nice typical size retail package that brings a war robot picture with simplified main features on the front. In the back of the package there is a features list, package contents, specification and bundled software. Opening the package, we could see what comes usually with the latest video cards: User manual, driver and software disc, a DVD disk with the NeverWinter Nights 2 game, DVI to VGA (D-Sub) converter, HDTV cable, Molex-to-PCIe power connector, Quick Installation guide and, finally, the video card, adequately wrapped into an antistatic pack. Taking in consideration the low pricing, not overtaking $249, we’d say that it was good to see a bundled free copy game, just sad to not see a recent game such as Crysis instead of NeverWinter Nights 2. 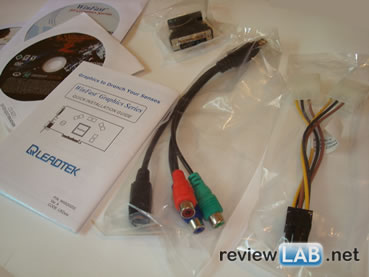 Delivers up to 2x the performance of a single graphics card configuration for unequaled gaming experiences by allowing two cards to run in parallel. The must-have feature for performance PCI Express graphics, SLI dramatically scales performance on today’s hottest games.

Twice the precision of prior generations for incredibly realistic lighting effects – now with support for anti-aliasing.

Advanced shader processors architected for physics computation enable a new level of physics effects to be simulated and rendered on the GPU – all while freeing the CPU to run the game engine and AI.

Advanced technology provides the ultimate in viewing flexibility and control for multiple monitors.

Able to drive the industry’s largest and highest resolution flat-panel displays up to 2560×1600.

HDCP Capable: Designed to meet the output protection management (HDCP) and security specifications of the Blu-ray Disc and HD DVD formats, allowing the playback of encrypted movie content on PCs when connected to HDCP-compliant displays.

High-Quality Scaling: Enlarges lower resolution movies and videos to HDTV resolutions, up to 1080i, while maintaining a clear, clean image. Also provides downscaling of videos, including high-definition, while preserving image detail.

Bad Edit Correction: When videos are edited after they have been converted from 24 to 25 or 30 frames, the edits can disrupt the normal 3:2 or 2:2 pulldown cadences. PureVideo HD uses advanced processing techniques to detect poor edits, recover the original content, and display perfect picture detail frame after frame for smooth, natural looking video.

Video Color Correction: NVIDIA’s Color Correction Controls, such as Brightness, Contrast and Gamma Correction let you compensate for the different color characteristics of various RGB monitors and TVs ensuring movies are not too dark, overly bright, or washed out regardless of the video format or display type.

T his card is the same to the NVIDIA reference except for the Leadtek customized sticker which covers the heatsink. With a PCB with length around 23 centimeters, its design has 8 layers with a 256-bit memory bus. The 256-bit memory bus may scare at first, comparing to 320-bit and 384-bit off respectively 8800GTS and 8800GTX cards, but NVIDIA thought about it and clocked the memories modules at high speeds 900Mhz (1.8Ghz) providing as much as 57 GB/sec bandwidth.

Thankfully this is a single-slot video card, making use of three heat pipes that transfer the heat flow from the copper that contacts with the GPU die to the heatsink. The GeForce 8800 cooler’s sole is made from copper whereas the rest of the base is aluminum.

This video card requires only one auxiliary power connector located at the rear of the board, thanks to lower power 65nm GPU. When using a single video card configuration, is recommended use of at least 400W PSU. 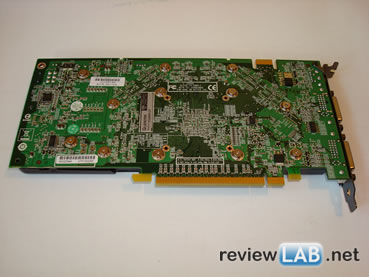 The GeForce 8800 GT supports dual-link HDCP and the latest PureVideo HD 2nd generation video processor, which can be also found on 8600 series while none of others 8800 series cards supports it.

The sticker over the fan states 256MB of memory and it’s the only visual differences between the 256MB and 512MB variants.

Most likely all SLI NVIDIA boards, this one also carry the SLI connector in its standard location along the top edge. Making use of SLI on a good performance card yet slim and quiet like this one seem to be pretty good option.

As we can see on specs, the transistors went from 681 million of the GeForce 8800 GTX/GTS series to about 754 million transistors on 8800GT. This is because NVIDIA incorporated the video processing engine, dubbed VP2 on 8800GT die alongside some more enhancements, the use of 65nm fab process was essential to achieve all of this.

The NVIDIA GeForce 8800 is the world’s first consumer GPU to support PCI Express 2.0, this mean that the bandwidth for each direction (upstream and downstream) doubled from 4GB/sec to 8GB/sec making it capable of total 16GB/sec bandwidth but can already expect to see the PCIe 3.0 doubling again the bandwidth from the current 2.0 version. These PCIe transitions won’t affect badly the consumer in anyway due to total backward compatibility from 1.0, 1.1 and 2.0. 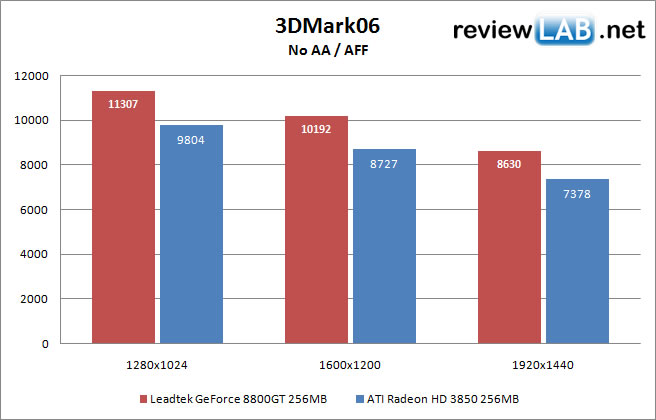 First all, this is an exceptional offer, a high-end performance card for a ‘mid-end’ price. NVIDIA again has proven the power of 8800 series enhancing and tweaking the core with launch of the 8800GT. Defeating the 8800GTS easily and having a comparable performance to 8800GTX, which is as much as twice expensive, 8800GT proves to be a powerful choice.

As we could see in our benchmarks, the ATI shipped out a capable competitor in the same price range of the 8800GT, but the Radeon HD 3850 256MB still had some difficulties to outperform the 8800GT, and most likely the Radeon HD 3870 would be the one to fill this gap between them.

Today we can find the 8800GT at low prices at online retailers, something around $210.

If you are looking for a high quality and great performance video card without spending $599 for a GeForce 8800GTX, you’ve found what you need and, the Leadtek WinFast PX8800GT is easily recommended!

This mid-end card is everything that customers were looking for, great price for awesome performance, and thus it gets our ‘Editor’s Choice!’ award.