What Happened to the Optimus Popularis Keyboard? 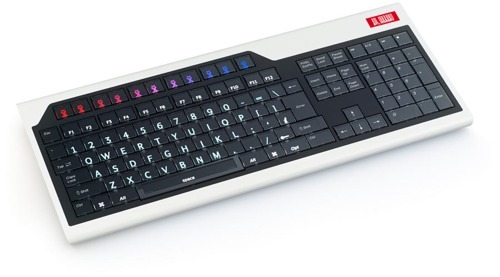 Optimus Popularis is the name of the new keyboard that the guys from Art Lebedev have in their hands. They were the protagonists of many articles with their Optimus Maximus, a different keyboard in which the keys are small OLED screens.

Popularis is a project that we had already talked about, but it was a year ago and many of us thought it was lost. Art Lebedev continues his development and is already closer to achieving the final product, which will be thinner, faster and simpler than the original Maximus. And hopefully also more affordable.

That first model is still selling for 1,667 euros, a price unreachable for almost any user. Indeed, the idea of using screens as keys is novel, but not so novel as to pay such a high supplement.

Launch date and price of Optimus Popularis are still totally unknown, and in fact it would be impossible to predict an approximate date for this new product. In the last three years we have only had three official news items with very specific information, and it doesn’t seem to be coming to an end. Maybe the end of 2011, maybe even 2012 or later. For now Art Lebedev doesn’t seem to be in a hurry to present it.

Therefore we can already confirm that the Optimus Popularis will be much smaller than its big brother, the Optimus Maximus, will come without an extended numeric keypad, and will have customizable LED keys, including the space bar.

But of course, we are talking about customizable keys, so it is already announced that having a numeric keypad will be as easy as customizing the function key that has been added at the bottom left, with which the keypad could be converted into a numeric keypad or an advanced calculator with just a click of a button.

Also noteworthy is the “Widgets” strip under the function keys, which can also be customized with different applications such as a mail manager or a computer activity monitor, among other examples.

We also have more information about the price, which although not specified, is guaranteed not to exceed 1000 dollars. About the availability, more of the same, it is not confirmed date but it is assured that it will be able to be reserved this same year, and that it will begin to be sent between ends of this year and principles of the next one.

In short, it seems that it will finally see the light of day and, the truth is, it looks better and better, although it will probably continue to be expensive for most users.